Death anxiety is embedded in the human experience. So too, the fear of women, especially their exposed genitals has captivated society for millennia. Putting these two phobias in context by examining historical depictions of the vulva, vagina and womb reveals how preceding cultures understood death as a cycle emanating from the divine feminine. Just as female reproductive organs are connected with life-giving, they have also been objects of panic symbolizing end-of-life or power to take life away. In this post I examine beliefs and myths surrounding women’s genitalia. Striking examples include ancient erotica such as Venus figurines, vagina dentata, and sheela na gigs. Analyzing these and other artifacts invites us to consider how fear of death has been socially constructed through the ages.

Vulvas have been both feared and worshiped since antiquity. Etchings of what is assumed to be a vulva date back some 37,000 years and is the oldest known cave art in existence. Venus figurines made by early humans 35,000-22,000 years ago have been discovered across Europe, Asia, and as far as Siberia. Earliest examples like the Venus of Hohle Fels are the oldest undisputed depictions of a human being. In total, over a hundred such figurines are known. Most have small heads, wide hips and exaggerated breasts or vulva. While most researchers comment on their explicit sexuality, we should not discount their capacity to convey sexuality and death simultaneously. In fact, many Venus figurines were worn as amulets in burial rituals.

Venus of Hohle Fels, figurine with detailed vulva, the oldest undisputed example of a human being. 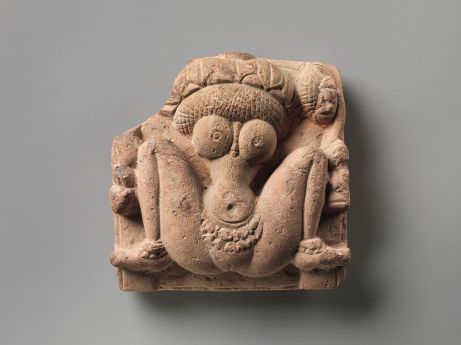 Not all representations of the vulva have been favorable. Folklore of the vagina dentata (toothed vagina) provides evidence that humans have imagined female sex organs to be attractive but also very dangerous. Myths vary in time and region yet exist in abundance all over the globe. The basic message is that a woman’s body and sexuality are deadly and must be controlled. Freud was the first to coin the term vagina dentata around the1900s, although the motif has existed for centuries. In psychoanalytic terms, vaginal teeth produce castration complex and penis envy. This myth has entrenched fears of women’s bodies and may even be linked to rape epidemics and female genital cutting. Vagina dentata binds women to the fear of death because the malignant vagina will maim and symbolically kill any man who dares enter.

Hine-nui-te-pō’s story offers a version of vagina dentata that is perhaps more redeeming. Also known as “Great Woman of Night” this giant goddess of death and the underworld is prominent in Māori history. One night a demigod trickster named Māui attempts to crawl through Hine-nui-te-pō’s vagina as she sleeps. Disguised as a worm passing through the birth canal in the wrong direction, Māui hopes to exit through her mouth and win immortality. A laughing bird recognizes Māui’s arrogance and awakens Hine-nui-te-pō. She clamps down with her obsidian vaginal teeth and crushes Māui to death, thus securing the same eternal fate for all mankind.

Similar artifacts that have shifted the narrative in a more empowering direction are sheela na gigs, or “sheelas.” These 12th- to 17th-century stone carvings of supernatural females displaying their vulvae have been found in the British Isles on all kinds of secular and religious architecture. From medieval churches, castles and town walls to holy wells and gravestones, they are usually shown standing or squatting with an exaggerated vulva that looks like a portal between their legs. They are fascinating remnants of a pre-Christian era, but there is no consensus as to what they symbolize. Experts have suggested everything from fertility to shaming women’s sexuality and endorsing chastity. They were so upsetting to clergy and churchgoers during the Anglo-Norman reformation that many were chiseled from their pedestals, buried or burned.

One interpretation is that sheelas were pagan goddess figures emblematic of the divine Earth Mother who births us then takes us back into her at the time of our eventual demise. Researchers often site the shape of the vulva with Paleolithic cave formations as an embodiment of the universal womb. The pubic opening as a source of life and destruction is a prominent theme in the archeological record as I described above. It has been associated with all stages of life including virility, decay and renewal. Taken in this context, sheelas are gatekeepers of human transformation representing a return to the womb at the time of death.

During the medieval period, vulvas were used as symbols of protection. Archeologists have discovered a large collection of leaden badges dating from the mid-14th to the early-16th centuries. These small wearable charms were often carried by travelers during times of pilgrimage. Such devotional items show the vulva winged or crowned making them seem more like royal entities rather than objects of fear. Some researches have described them as obscene, pornographic or parodies. Compelling evidence suggests the badges were used to protect the wearer from contracting the greatest pestilence the world has ever known: the Black Death. During plague years it was commonly assumed that the illness spread through eye contact with a diseased person via the Evil Eye. Lacking concrete medical knowledge, early folkways suggested shocking the Eye and diverting its deadly gaze through the use of quasi-magical or apotropaic devices. While not all amulets carried by pilgrims in search of miraculous cures were graphic, what could be more shocking than the sight of exposed genitals?

“Anasyrma” or exposing the genitals is a form of exhibitionism that has been documented since at least the time of Ancient Greece. Such ritual exposition has accompanied circumstances of war, to evoke laughter and for emotional healing. Many historical references suggest that anasyrma has supernatural effects to thwart harm or evil spirits. In the Homeric Hymn, Demeter (goddesses associated with cycles of life and death) is in mourning after her daughter, Persephone, has been taken to the underworld. Baubo visits Demeter and makes the goddess laugh by lifting up her skirt. In some parts of Nigeria, women invoke a curse upon men by showing their genitals. Men who are exposed are considered socially dead and no one will cook for them, marry them, enter into contracts or buy anything from them.

As women give life, they can take it away. Through cultural displays and myths of women’s genitals we have learned to associate the vulva with aspects of sexuality, fertility and spirituality. Intrinsically linked to these cycles is the final stage of life culminating in death. While such images may be shocking, they are necessary for reframing women’s creative/destructive power. Moreover, expanding our interpretations of the vulva helps shift the personification of death from a masculine, malevolent force to something more womb-like and motherly. Maybe it is time to reclaim the vulva as a symbol of comforting mortality and pass the Grim Reaper’s proverbial scythe to its rightful owner.

One thought on “Death & the vulva: ancient erotica and the fear of mortality”