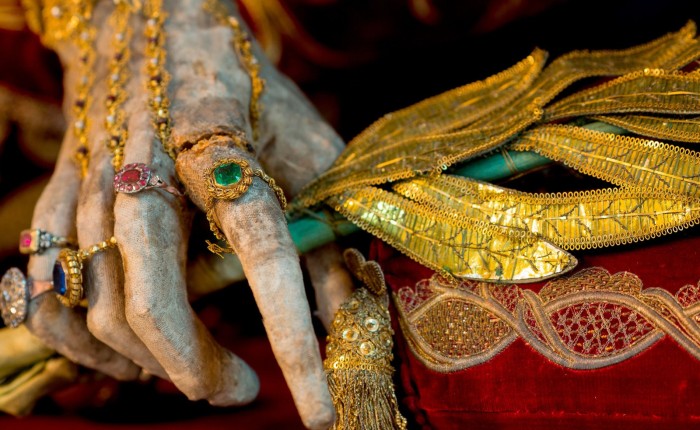 I have long been fascinated by the opulence of Catholicism. While I’m not particularly religious I appreciate its moribund ritual depictions. Case in point: these exquisite corpses who were revered but largely forgotten in Europe after the 19th century called Catacomb Saints. A quick Google search suggests this name has not yet been claimed by some metal band. 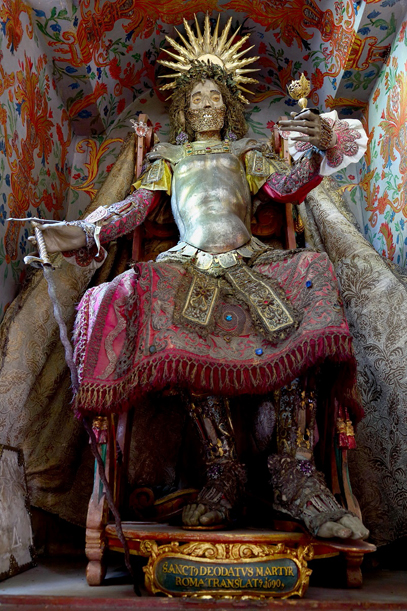 Catholics have been conspicuous about their elaborate iconography since before the 4th century A.D. Not all of the attention has been good and criticism gave way to church plunderings across Europe during the 1500-1700s. Opponents saw to it that once-cherished statues were systematically destroyed in protest. To bolster support and rebuild the church the Vatican sold bones to congregants and wealthy families that they passed off as official relics. The only problem was that most were not real relics, meaning they were not consecrated remains of actual canonized Saints. 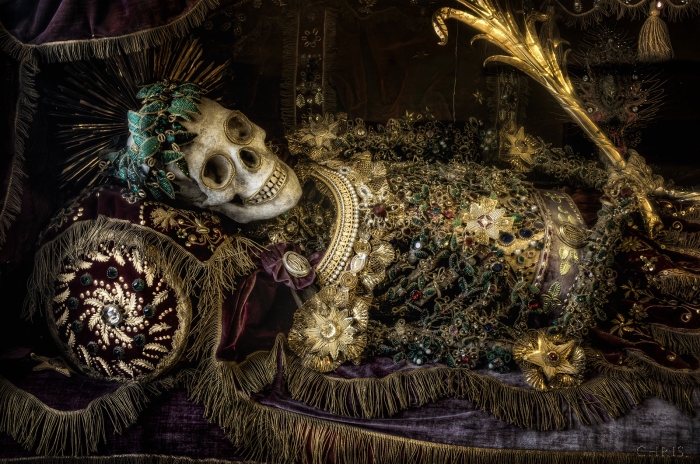 To local churchgoers mainly in Germany and Switzerland whose communities inherited skeletons it didn’t matter much. While cadavers could have belonged to any commoner plucked from the Roman Catacombs, church officials pooled parishioner funds to purchase the expensive remains. Skilled nuns then spent years meticulously decorating their Saint’s bones. They became a source of regional pride and were even thought to perform miracles.

(Some were enshrouded in fine mesh cloth hand-woven by nuns. Credit)

Communities were unwavering in support even if their beloved Saint was found to be a fraud. Then in the late 18th century Austria’s Enlightenment-era emperor decreed all fakes were to be destroyed. The Saints were again marched to their graves, tucked away in cellars or ransacked for their gems. Paul Koudounaris, author of the book Heavenly Bodies notes that only 1 out of every 10 bodies that disappeared in the 18th and 19th centuries survived for public display.

I used to be put off by the seeming decadence of the Catholic Church. But since I’ve been studying historical deathways I can see how organized religions like Catholicism use the macabre and garish as a means to cope much like I do. I’m also struck by the sense of unity that being around such beauty evokes. It’s a way for communities to promote awe-inspiring if not complicated art in the face of death.

I feel this same sense of communion when I visit Catholic cemeteries with all their giant crucifixes and gilded statues. On a recent trip to Orange, California I was fortunate to witness a large family celebrating with a picnic around a relative’s burial site at Saint Sepulchre well into dusk. Even my Uber driver proudly remarked that his mother-in-law was laid to rest in the cemetery where he was dropping me off. It’s a lovely place and deserving of the praise.

(Thanks to my friend and new co-worker, Alison for tipping me off to this beautiful place! Photo by Alysen Wade)

P.S. if you’re doing any world traveling here is a list of all the places where Catacomb Saints are located.