Death is the most natural part of the human experience yet there is nothing innate about how we treat our deceased. Throughout history societies have employed vastly different practices for disposing of and memorializing the dead. To be clear, cemeteries are only one form of ritual commemoration.

(Example of Romano-Germanic momento mori demonstrating the importance of committing loved ones to the ground. Credit)

There are even subtle differences between words that describe specific burial places such as necropolis and churchyard. Today I’ll focus on the churchyard, which is defined as a consecrated space owned by a church or attached to a church structure. This analysis is specific to Christian churchyards that spread westward from the early Middle Ages.

Churchyards were a logistical necessity offering a place to partition decaying bodies within limited space. They also served a socializing function since medieval churchyards were gathering places for town functions or ceremonies.

Maintaining strict class distinctions was apparent as affluent citizens were laid to rest inside church catacombs protected from grave robbery while those with less means were consecrated outside. Even the iconic image of a little hillside churchyard was often the geological result of stacking remains on top of each other for years and elevating the land. 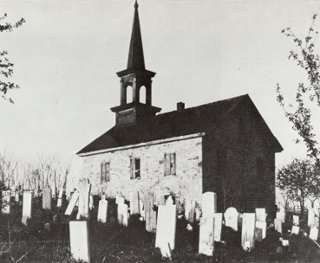 With all their idyllic imagery and quaintness, churchyards also share pretty barbaric roots. During Christianity’s rapid expansion in attempt to stamp out detractors, missionaries of the church were instructed to take over pagan burial grounds. This served not only to destroy so-called sacrilegious pagan relics but also allowed the Christian faith to maintain dominance by appropriating the sacredness of the space. It wasn’t enough for early Christians to control the living, they also required eliminating any memory of the polytheistic dead. Even the Vatican was built on top of 22 pagan tombs which are still secured in grottoes under St. Peter’s basilica.

(One of the world’s oldest surviving pagan cemeteries in Turkmenistan. Credit)

Churchyards are among my favorite burial sites despite their complicated past. Largely because they remain unchanged for hundreds of years churchyards hold generations of family members and relate a powerful narrative of belonging. I visited a couple small rural churchyards on a recent camping trip and was overwhelmed by the sense of community and care.

(It was touching to see how cared for headstones were. This was obviously cleaned with a power sanding tool. Copyright Alysen Wade.)

The first church we stopped at was Jonah’s Run Baptist in Wilmington, OH. According to their website, Jonah’s Run was founded by Daniel Collett and a few others in 1839 who purchased 4+ acres to build a church and cemetery. The site was purchased from Levi Lukens, a Quaker who arrived from Virginia in 1802. The cemetery was nearly full before 1870. Not many are interred past the late 1800s save a few recent graves that were added as of the early 2000s.

(During a time when the average age of death was 30 this woman lived to be 90 in 1895. Copyright Alysen Wade.)

The second church we stopped at was Sharon United Methodist also in Wilmington, OH. Unfortunately, the church does not keep historical records that I could find. Like Jonah’s Run most of those laid to rest dated from late 1800s to early 1900s. We could not locate any recent graves. Aside from the beautifully ornate and handcrafted stones another remarkable characteristic was the softness of the ground. At no other cemetery have I felt so nervous walking around. It might have been due to recent rainfall but the earth had an unusually sodden feel that made me slightly worried about stepping too near the headstones. 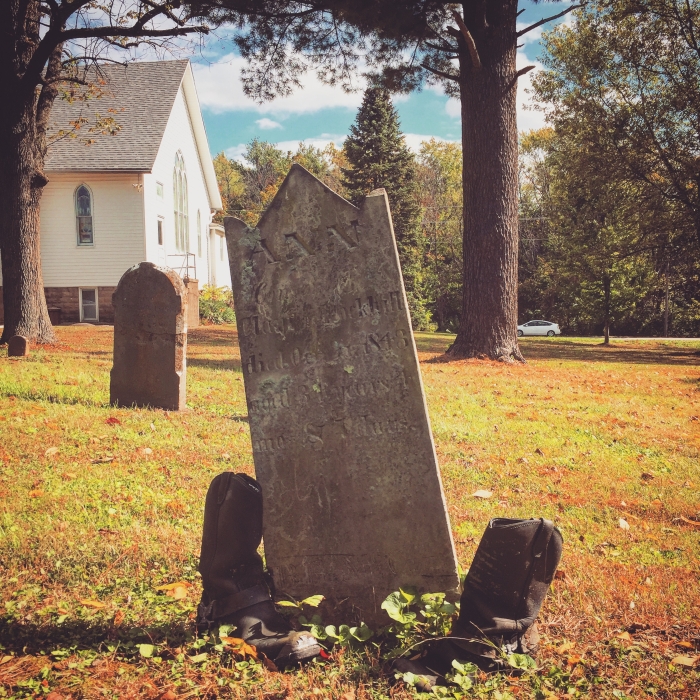 (Ann was laid to rest in 1843 and I’d like to know if these are her original boots or a family heirloom. I also love that death dates were recorded based on how many years, months, and days you lived. Copyright Alysen Wade.) 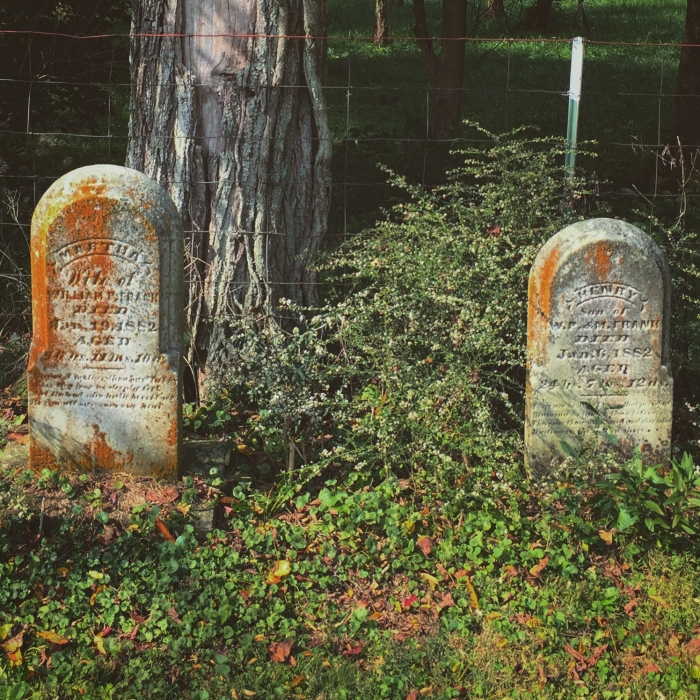 The ornate hand detailing was some of the best I’ve seen:

Visiting these two churchyards really solidified for me that cemeteries are hyperlocal, intensely personal spaces. If you’re ever traveling in a remote location and spot a churchyard cemetery I urge you to explore. Special thanks to my friend, Ariel who didn’t mind veering off the beaten path!