Let this post officially serve as the start of a new gross-out series. While it is true that my affinity for the macabre is slightly above average, I think it is important to observe the darkest parts of human death in earnest. I landed on this particular topic after reading the popular non-fiction, Guns, Germs, and Steel by Jared Diamond. The book offers a wealth of fascinating information, so I don’t know what it says about me that this was a big sticking point. I’d apologize for my garish affinities, but then here you are reading this as well. Quick caveat, I have no interest in “otherizing” non-Western/Eurocentric ways of death. Instead, I hope to gain a better understanding for the wide range of funerary practices that make up the whole picture of how different cultures deal with death. 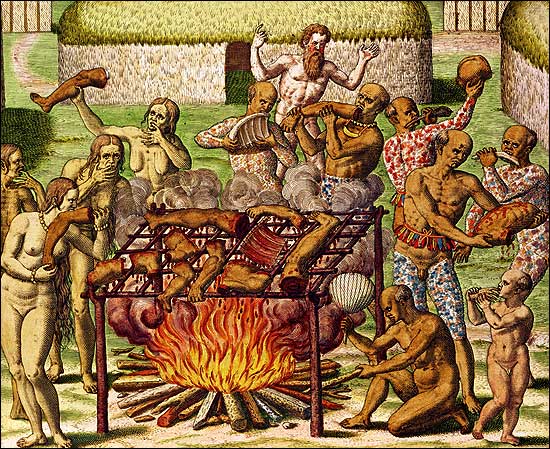 Endocannibalism is an anthropological term used to describe the ritualistic practice of consuming one’s dead. This tradition is usually passed down among generations and can be divided into two forms: endo- and exo-. The difference being if the person cannibalized was from within the social circle (i.e. family member, tribesperson) or from an outside group (exocannibalism=enemy, rival).

The important thing to remember is that among traditional acts of endocannibalism, there is an expression of veneration or consumption for the purpose of recuperating some intangible force, like a person’s wisdom or soul. The most recent and well-documented account of this practice comes from the Fore peoples of Papua New Guinea.

Here, endocannibalism was a solemn gesture that involved all members of the deceased’s family. There were prescriptive practices as to who could feast upon what portions of the body based largely on gender roles (men would eat the sinewy parts while women and children consumed the brain). Also important was the aspect of grief. Consuming a loved one served the purpose of alleviating memories, transforming the body, or extenuating notions of life-after-death.

Granted the practice isn’t so tender when considering the counterpart to the equation, which is eating someone out of competition or hate. However, factor in the context of survivalism in regions where food sources are far more scarce and you get a better picture of how lines of ethics are not always cut and dry (see the Donner Party).

The problem in my view is not that this practice existed (and still does) but more that it stands out as a means of social control whether explicit or implicit: Explicitly in the sense that humans have used myths or actual practices of cannibalism to inspire fear in their rivals (the Aztecs as one example); implicitly in that such behavior has often been used as a justification for labeling certain groups as barbaric or uncivilized.

The field of anthropology has made significant contributions in identifying various forms and causes for cannibalism. There is argument among scholars about the origins and necessities of humans eating other humans including survivalism, idealism, and religious affiliation. Besides, the Christian practice of Communion isn’t terribly far off.

We take for granted that narratives of barbarism are true and not fabricated by those in power as a way of demonizing groups that have been subjected to Western expansion. In fact, everyone’s favorite imperialist colonizer, Christopher Columbus, first used the term in his diaries from the 15th century after his crew was told to avoid certain areas of the New World because they were inhabited by “savage flesh eaters” that were never proven to exist.

It’s interesting to identify how the term has become so taboo. Indeed, there are lots of good reasons not to eat your neighbor or your aunt (have fun reading about a disease called kuru and never sleeping again). In any case, this cultural phenomenon is one that contains all the complexities of modernity, colonization, global perspective taking, and religious awareness.

Thanks for reading this much text, feel free to go search all the graphic pics. I felt like I had to stop myself somewhere.

One thought on “What a Way to Go: Endocannibalism”